If you aren't familiar with Taas, you might want to first read the Testing Akkeris Apps with TaaS Tutorial

We will assume for the purposes of this tutorial that you have an Akkeris app, a test suite in Akkeris, and a Taas test registered. If you don't have these things, you can follow the Tutorial to get them set up.

Make sure your Akkeris app has been tested previously by Taas and the test passed (if you followed the tutorial, you're ready!)

Pipeline status checks let you get more information on the status of each app in an Akkeris pipeline. You can then choose to require that an app have a certain status before it is allowed to be promoted to the next pipeline stage.

When an app is tested with Taas, Taas will report the status of the test (pass/fail) to the associated Akkeris release.

That status can then be used in a pipeline for promotion control.

Let's create a pipeline so we can see how the process works.

You can use either the UI or CLI for this, but pipelines are a lot easier to understand in the UI. Navigate to the Pipelines page and click the "plus" icon in the top right to create a new pipeline. Give it a name (e.g. "tutorial"), and click "Finish".

Now, let's add some apps to the pipeline. Add a new app to the Development stage by clicking the "plus" icon next to "Development".

Search for the name of your test app and click "OK". 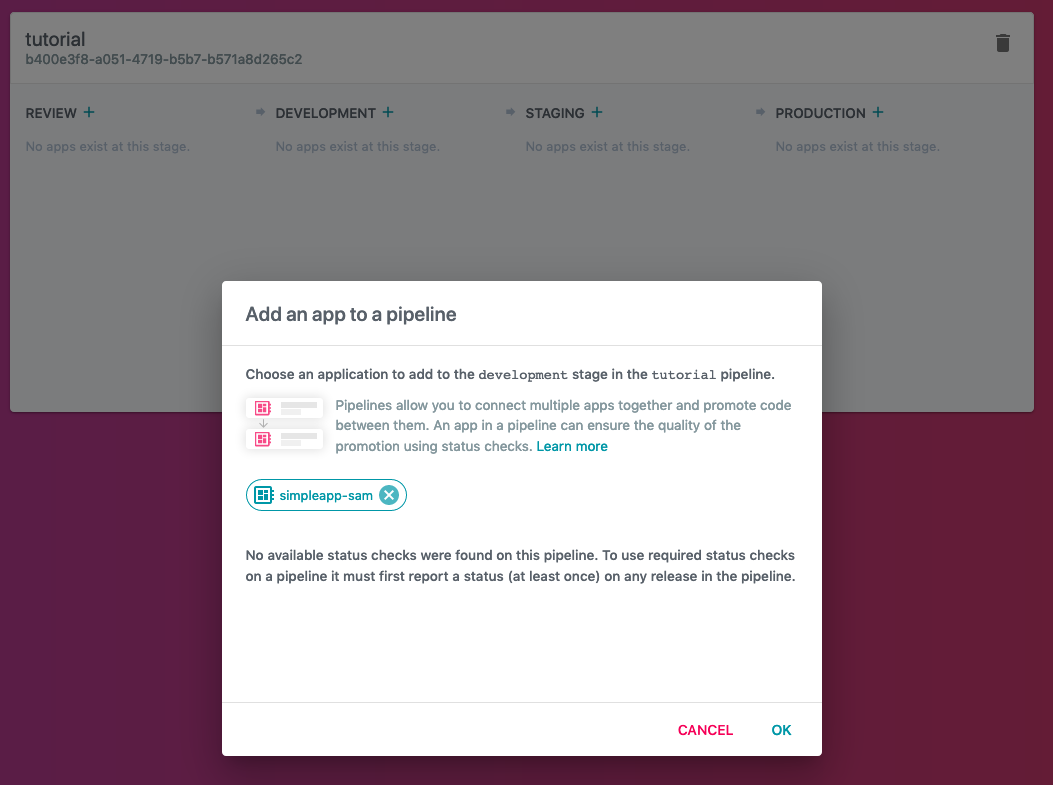 Great - your Taas-targeted app is now in the Development phase!

Since you have tested your app with Taas previously, you can see that the recent release has a "Tests Passed!" status attached by Taas.

Let's make a new "staging" app that we can promote our "dev" app to. You can create this app via the CLI or UI, and name it whatever you wish.

Now, let's add it to our pipeline. Click the "plus" icon next to Staging, and search for the name of your test app.

As you can see, the Taas status check is available! Click the checkbox to enable the status check, and click OK. 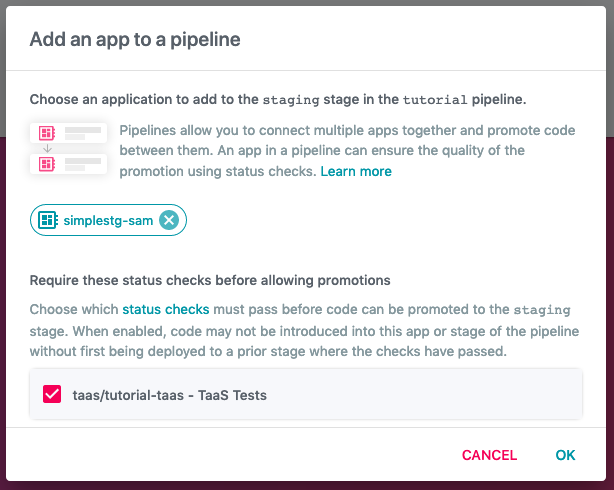 Our pipeline is now complete!

Let's make sure our status checks work. Click the "Promote" button on your Development app and see what happens! 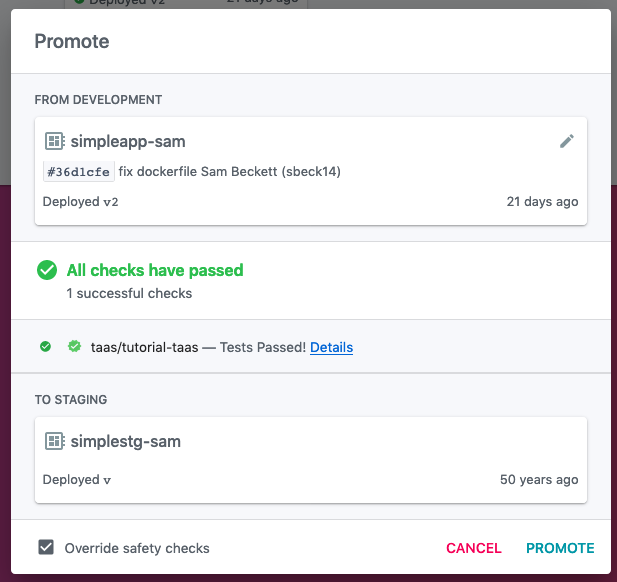 As you can see, Taas has reported a successful status, and we are allowed to promote the app. Clicking OK will promote the app to the Staging stage, and a new release will be created on that app.

What if our development app failed its test? Let's find out!

Remember that bit of code in our test suite from the tutorial that would automatically fail a test if an environment variable was set?

Let's put it to use. Add the FAIL environment variable to your Taas test and trigger it.

Once the results roll in, you'll see that (unsurprisingly) the test failed. Taas will then report the status as "failed" in the latest release:

Now, go ahead and try to promote your app: 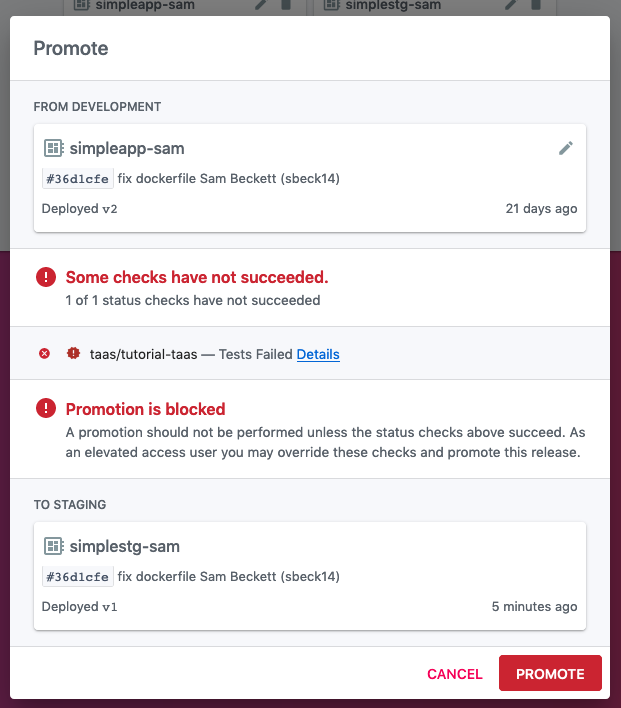 As you can see, promotion has been blocked due to our Taas tests failing. If you have elevated access, you can bypass the warning, but it's not recommended.

Our status checks worked! If you remove the FAIL environment variable from the test and re run the test, promotion will be available again.

If you don't like checking if the test has passed and then manually clicking "promote", Taas can automate pipeline promotions!

Let's edit our Taas test to enable this feature. Replace tutorial-taas with your Taas test name if necessary.

Hint: did you remember to remove the FAIL environment variable?

If you have Slack notifications set up, you'll see the result of your automated promotion.

If you check your pipeline, you'll see that the promotion and deployment was successful. Hooray!

Let's add that FAIL environment variable back in so we can see what happens when tests fail.

If you have Slack notifications set up, you'll see the result of your automated promotion there.

As you can see, the test result was "failed", so no automatic promotion took place. If you go to the pipeline, you'll see a failed status in the Development stage, and promoting will be blocked.

This isn't the end - you can actually chain multiple Taas tests and have your entire pipeline be tested and promoted in each environment from Review to Promotion when your app is released! See Promoting Apps with TaaS for more information.